In honor of its 50th Anniversary
the Temple of Understanding hosted an historic
Interfaith Visionary Call To Action Conference
on Sustainable Development
Tuesday, October 19, 2010 • The Pierre Hotel • NYC

The leaders of international interfaith organizations, along
with other eminent interfaith visionaries, convened for the first time in 50 years to explore the role of the interfaith movement in addressing climate change and promoting sustainable development.

The statement from the conference was delivered by Van Jones to Robert Orr, the Under Secretary General of the UN on October 19, 2010 at the 50th Anniversary Gala.

Statement from the Call to Action Conference of Interfaith Visionaries, organized by the Temple of Understanding:

On October 19, 2010, 120 interfaith visionaries, environmental experts, civic and business leaders met in New York City to engage in a creative conversation to explore how they are uniquely positioned and poised to help shape the transformational potential of this intersection of ecology and religion.

This conversation helped define the potential role that the broader interfaith community can play in the effective work of the Interfaith Consortium for an Ecological Civilization (ICEC). We affirm that environmental concerns are moral and spiritual concerns, not just political concerns, and that action must begin locally.

The Interfaith Visionaries who Attended included:

Rev. Dirk Ficca, Executive Director, Council for a Parliament of the World’s Religions 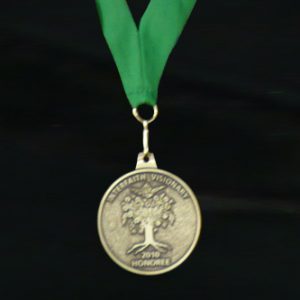 Rev. William Lesher, Chair Emeritus, Council for a
Parliament of the World’s Religions

The Reverend Dr. Franklin Vilas, Trustee, International Communities for the Renewal of the Earth

Honored Interfaith Visionary — Professor Johnny Lu is the founder of the Jewelry Institute of America and has made great contributions to charity, world peace and environmental protection over the past 50 years. He has met regularly with global religious leaders and was granted a Jubilee 2000 license by Pope John Paul II. He has been awarded the Ellis Island Medal of Honor, recognizing outstanding American immigrants. An active philanthropist, he pioneered the use of jewelry, like the Wish Pearl, to raise interfaith understanding.